Lynn Looks to End Struggle With Bat Against KXIP

Australian batsman Chris Lynn is known for his hitting prowess, and has proven credentials as a destructive batsman. In the 107 T20 games he has played so far in his career, he has scored 2,997 run at a strike-rate of 147.12. The right-hand batsman can change the game in a matter of few overs, and for this very same hitting ability, he was bought by IPL franchise Kolkata Knight Riders for 9.60 Cr.

But till now in this edition of the tournament, his bat has been quiet, and in 5 matches has scored 107 runs. Lynn, who had brilliant IPL season for KKR in 2017 where he scored 295 runs in 7 matches hasn’t had great time in 2018. 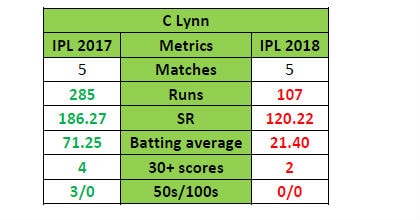 Come Saturday, Lynn would be hoping to turnaround his fortunes, and get some runs under his belt. Till now his highest score in this edition of the games is 49 against Sunrisers Hyderabad. Lynn has struggled against spin and was seen playing with a horizontal bat in only the second ball of his innings to K. Gowtham who castled him in the last match against Rajasthan.